Starting and ending at the Duke of York Pomeroy

While sitting over a cup of coffee, with Bridget, the landlady, and her daughter (at the Duke of York in Pomeroy/Flagg) before heading out for a walk I promised to send a write-up of the walk so they could add it to their website. So here it is…

We planned the route using Quo2 (and checked it on the OS Maps application). Quo2 said it would take nearly 6.5 hours OS Maps said nearly 5.5 hours – it took 6 hours exactly.

We left the pub and got onto the footpath which starts about 2 yards to the south of the pub car park. Unfortunately, we were busy chatting and laughing so almost immediately got off the route and ended up walking round the road after a couple of hundred yards because we weren’t paying attention to where the footpath went. We got on the footpath again after about 10 mins and never again lost it.

So, across the fields ENE to Flagg. Bright sun but a fairly stiff breeze. Didn’t see much of Flagg but it looks like a nice little village. Turned pretty much north to Taddington – a much bigger place. Across the A6 and up the hill to High Dale. Met a couple who were impressed that we had ignored the great weather forecast – by that time it was persistently raining – they looked like they were perished but apparently nearly finished with their walk. East through the area marked on the map as Brushfield – a couple of nice houses and nothing more. Then we turned South to get down to cross the A6.

Once over the A6 we climbed up the Deep Dale valley. Very quiet – little breeze and not a soul. Once we crossed the road at the top we had a series of walls to cross. By the end of that stretch into Monyash the slippery steps and the constant up and down had wrecked one knee. Previously we have considered the wooden stiles of Leicestershire the ‘least walker friendly way’ to get over field boundaries – these stone wall crossing with the steps built in are much less fun especially in the wet! The rest of the walk was a hobble – we would probably have managed the 5.5 hours without that problem.

Out of Monyash (there looks to be a very, very small school in Monyash – can’t be more than one classroom from first glance) we were walking in heavy drizzle up the hill to cross the A515 (about 4km SE of the Duke of York). After that down the hill a little onto the northern end of the Tissington Trail by Moscar Farm. We worked out which way the wind was blowing at that point because as we turned to walk NW it started to feel a bit colder and wetter as the wind was firmly in our faces and there were no protective trees or hedges. Trousers got soaked through – the rain hadn’t been sufficient to prompt the waterproof over-trousers and the temperature despite being the middle of February was not at all cold. As we were nearly back to Pomeroy we didn’t bother putting any extra layers on.

Couldn’t really miss the footpath off to the right to get from the Tissington trail to the pub – but even if we had the trail ends very shortly afterwards and it would have added only about 1km to go to the end and walk round the road back to the pub.

It was a great walk in a beautiful part of Derbyshire. Despite about 5.5 hours of drizzle the walk again proved that if you have the right clothing (and you wear it) the weather isn’t a discouraging factor when walking. Much better to be out there than stuck inside watching the rain on the window. 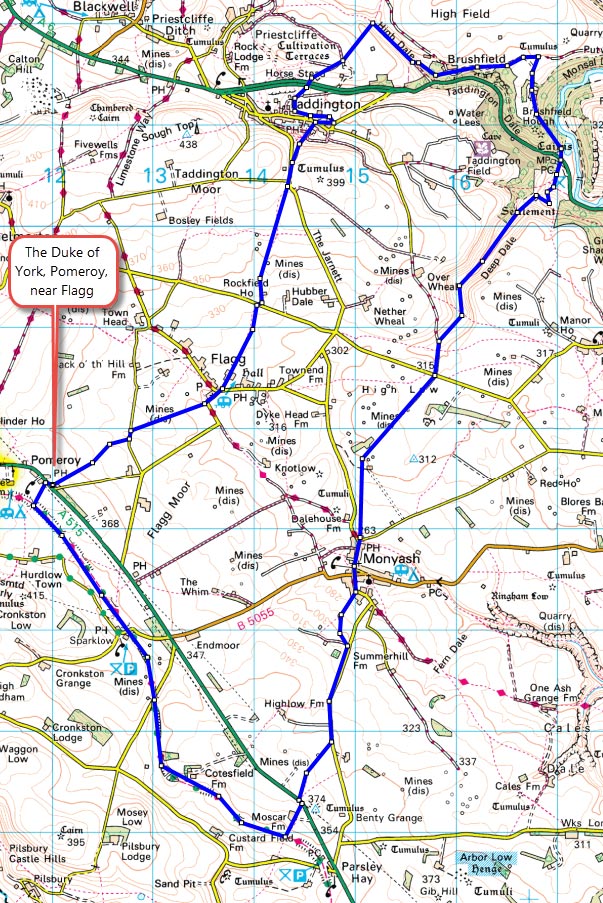